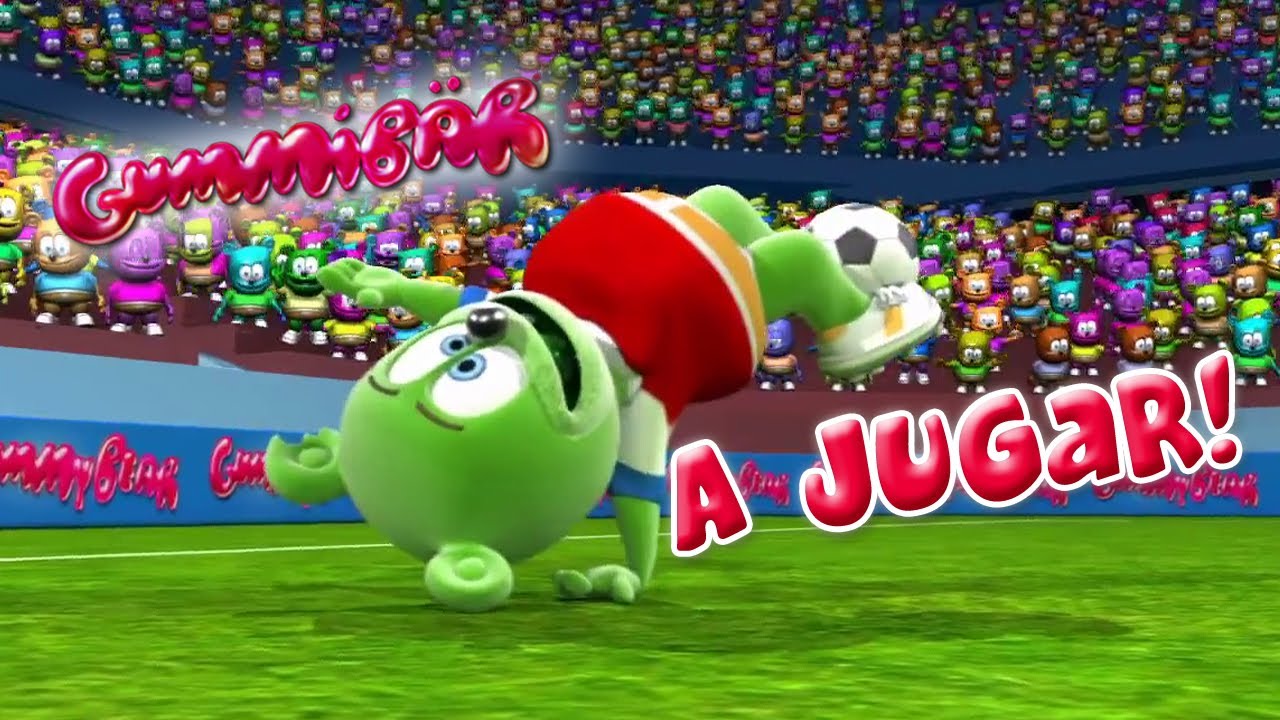 A Jugar! is the Chilean Spanish version of Go For The Goal by Gummibär aka Osito Gominola, Ursinho Gummy, Gumimaci, Funny Bear, The Gummy Bear, etc.
Download from iTunes –
Shirts and merch –

Visit Gummibär online at www.gummibar.net. A Jugar! – The World Cup Soccer Song – sung in Chilean Spanish by everyone’s favorite funny animated gummy bear. Also known as Osito Gominola. Look for it in many other languages also!

More about Gummibär
Gummibär, a funny and lovable cartoon character, is a green animated gummy bear with a multitude of talents. Whether he is singing, break dancing, or playing his tuba, both children and adults can’t get enough of his funny gummy antics. His multi-lingual abilities have led to a huge International following and allow him to sing in 20 different languages including English, Hungarian, French, German, Spanish, Swedish, Portuguese, Czech, Slovak, Russian, and Hebrew with more to follow.

With close to 1 billion plays and counting, the video for “I Am A Gummy Bear” (The Gummy Bear Song) by Gummibär, has captured the hearts and minds of Internet users world-wide. Viewers of videos on YouTube, MySpace, and other social networking websites have made this animated short one of the most watched, most discussed, and most favorited videos on the Internet.

Initially a regional success in Hungary, it wasn’t long before the catchy little 30 second animated clip found it’s way onto social networking sites. In a matter of months, dozens, then hundreds, and now thousands of postings of the original video have popped up all over MySpace, YouTube, Facebook, and just about every online community that you can think of. In addition, thousands of people have created and posted user generated fan videos of themselves singing and dancing to The Gummy Bear Song as well.

About the World Cup:
The FIFA World Cup, also called the Football World Cup or the Soccer World Cup, but usually referred to simply as the World Cup, is an international association football competition contested by the men’s national teams of the members of Fédération Internationale de Football Association (FIFA), the sport’s global governing body. The championship has been awarded every four years since the first tournament in 1930, except in 1942 and 1946 when it was not contested because of World War II.

The current format of the tournament involves 32 teams competing for the title at venues within the host nation(s) over a period of about a month — this phase is often called the World Cup Finals. A qualification phase, which currently takes place over the preceding three years, is used to determine which teams qualify for the tournament together with the host nation(s).

During the 18 tournaments that have been held, seven nations have won the title. Brazil have won the World Cup a record five times, and they are the only team to have played in every tournament. Italy, the current champions, have won four titles, and Germany are next with three titles. The other former champions are Uruguay, winners of the inaugural tournament, and Argentina, with two titles each, and England and France, with one title each.

Soccer With My Dog