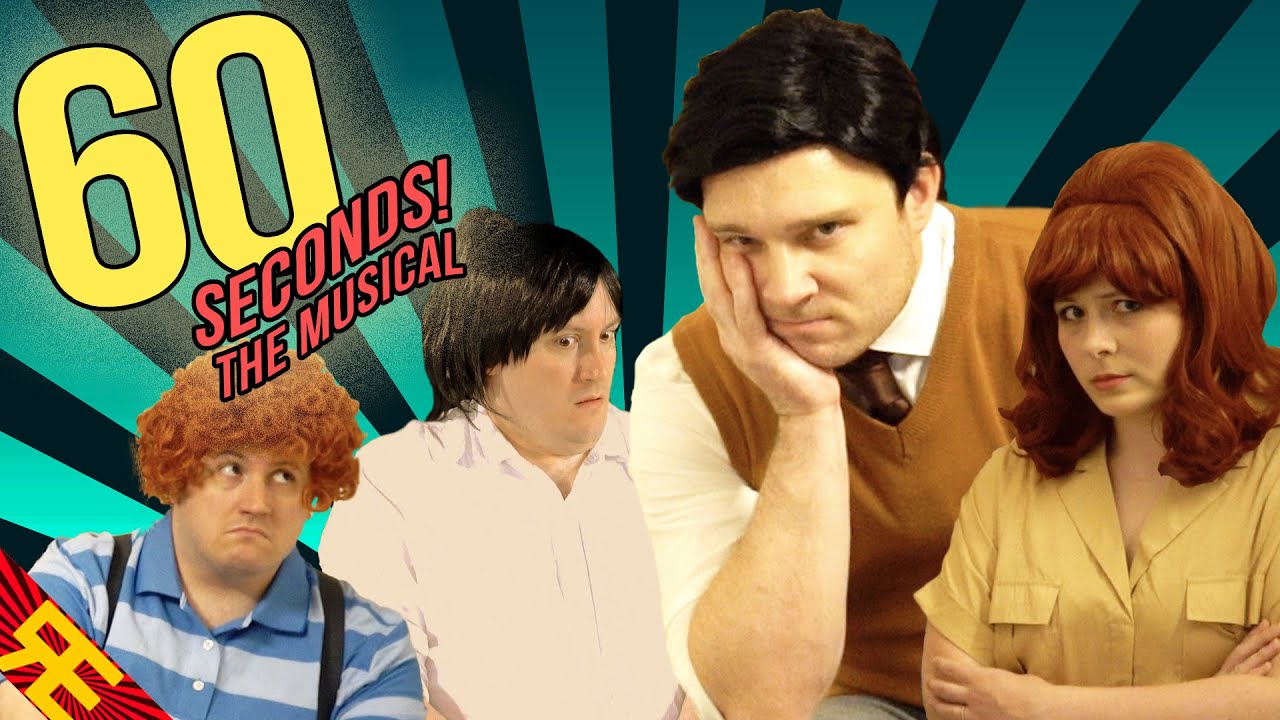 60 SECONDS! THE MUSICAL [by Random Encounters]

The Commies are coming! Are 60 seconds enough for Ted and his family to survive the blast… and each other? Play 60 SECONDS live with us on REplayed at 5pm Pacific ➤

BLOOPERS ➤
BEHIND THE SCENES ➤

WATCH US PLAY THE GAME ➤

Mix, master, and guitar recordings by the legendary FamilyJules ➤

(Did you find The Beard in every musical? Tell us his timecode in the comments!)

✸BECOME AN ENCOUNTERER✸
Hit the Bell and Watch us Weekly!

60 seconds! Better make ‘em all count!
I gotta grab cans of soup in sufficient amounts-
I’ve got my son and my daughter,
And lots of bottled water for us four…

30 seconds till the world goes to heck!
We should’ve…. Moved someplace safer,
Like Montreal or maybe Quebec…
Who am I kidding? There’s Communists in Canada as well!

30 seconds till the end of my life!
To find a… map and a gun, and to wrangle my wife!
It’s time to hunker down! The bunker’s down
where bombs can’t reach or breach our shelter’s shell!

Well, now that we’re down here,
let’s try to stay calm-
-The Communists blew up
Our house with a bomb!

Yes, kind of uncalled for,
But we’ll still make it through this.
Although Russia tried to crush us,
still the fact is, they blew this.

The Reds want us dead,
and they’re certain we’re hurtin’.
They’d like to bury us quick
In their thick iron curtain.

If we hide here inside here,
we’re just askin’ for atrophy.
We’ll fall catatonic.
In this atomic catastrophe!

Our rations are low,
So let’s go do some browsing.
We’ll start with a trip
To the retirement housing.

Way to go, Timmy,
You’re another year older!
We got you a med kit
to patch up that shoulder!

Ted, have some soup, Dear,
It’s much more nutritious-
-What is Dad doing?
-These shrooms are delicious!

It’s dank, to be frank…
Maybe ranks as a junker,
But no commie’s gonna bomb me
In the comfort of my bunker!

What’s one more day of starving in a concrete hole?
What’s twenty years to life in here without parole?

What’s one less can of soup? To feed our whole dang group?
What smells like sh- er, poop? What’s one more day?

Ted, this is crazy!
Dolores, relax!
A man’s gotta shave;
All we’ve got is an axe…

I’ll see who’s calling-
Now that’s a superb goal.
Ted, dear-
-What is it?!
-Our daughter is purple…

Dad, it’s for you-
They’re in quite a tizzy.
It’s some folks from Hill Valley calling-
-Tell them I’m busy!

The gun’s out of ammo,
But we’re lucky I brought it.
Something was growling,
but it’s dead now – I shot it.

What’s one last afternoon to cough and barf and swoon-
Who cares! We’re dying soon! What’s one more day-